Sometimes you're obligated to take a picture. Obligated by money or history or reputation, you're the individual who's expected to produce a picture of this, today. And you're generally happy to oblige.

But this day has no obligations. No expectations. Today, the only quarry is wild art.

It was warm out, but the winds were up. Good kite day. We went out late in the afternoon. Catch the golden hour. Off-shore winds were bringing smoke from the wildfires in the east. We'd had a respite for a couple of weeks. Even got some good rain. That helped with the fires, but they're still burning and now the smoke is back.
Not long after we got there the evening marine layer started settling in. Combined with the smoke and all the hurt that come with that, I got golden hour times two.

We came back in the morning and the effect was even more intense. Marine layer was still overnight heavy and the sky a popsicle orange.
I mentioned we came after birds. Apparently we live in a pretty busy migratory lane and we've heard flocks come through here in the fall and winter. It's after the equinox, right? But there's nothing here but off-season locals. Like us.

My wife found this one. Even with her giving me directions, it took me 30 seconds to see it. I'm embarrassed but grateful for patience exhibited all around.

Sun coming up over the mountains burnt things off quickly. Not much left but this fogbow. Still no elk.

You might have heard, we're having wildfires over here. Whole left coast of the US. And southerly winds are pushing all the smoke this way. According to the maps, my little mountain perch is about the healthiest place to be in the state. And it still looks like this.

We mainly stayed near the cabin, but one morning we went into town for breakfast. Town is a little Bavarian-themed village. Very touristy. It's in all the guide books. But the businesses are all locally owned and there's a pride of proprietorship that I admire. I'm rooting for them to succeed.
They moved everything outside because of the virus, then the smoke came. Next up, winter, which is their busiest season.
When the kids were little, we used to take them up here for the Christmas festival. We told them it was the North Pole and they bought it. It's about a three-hour drive, which in the mind of a four year old is probably the right distance. It had snow and Santa and elves and treats. Why wouldn't it be the north pole?
And one of great charms of this town on a cold winter night is when everyone packs themselves into one ratskeller or another for warmth, a glass of chear, and the companionship of friends and strangers. I fear that's in jeopardy this year and what a lost Christmas might do to this town.

We had breakfast at the Renaissance Cafe. I'd eaten here before. The food is good and the coffee is great. But it's down in a cellar and, while open, I couldn't bring myself to take the family in. We called our order in from the street and it was delivered by the gowned, masked and disinfected wait staff. Very clinical. Tasty none the less, but not the same.

I mentioned I've shot thousands of rolls of Tri-X. I was pretty good at making a B&W print. But I did that because it's what the technology of the day supported. When I picked things up recently I told myself, full color, full time.
But toggling that button in post really changes the composition of the image. It simplifies things. Makes it easier to guide the viewer's eye through the frame without distraction with just light and shadow. In this age, it's a bit of a parlor trick. I'll keep it in the toolbox. Bring it out judiciously. 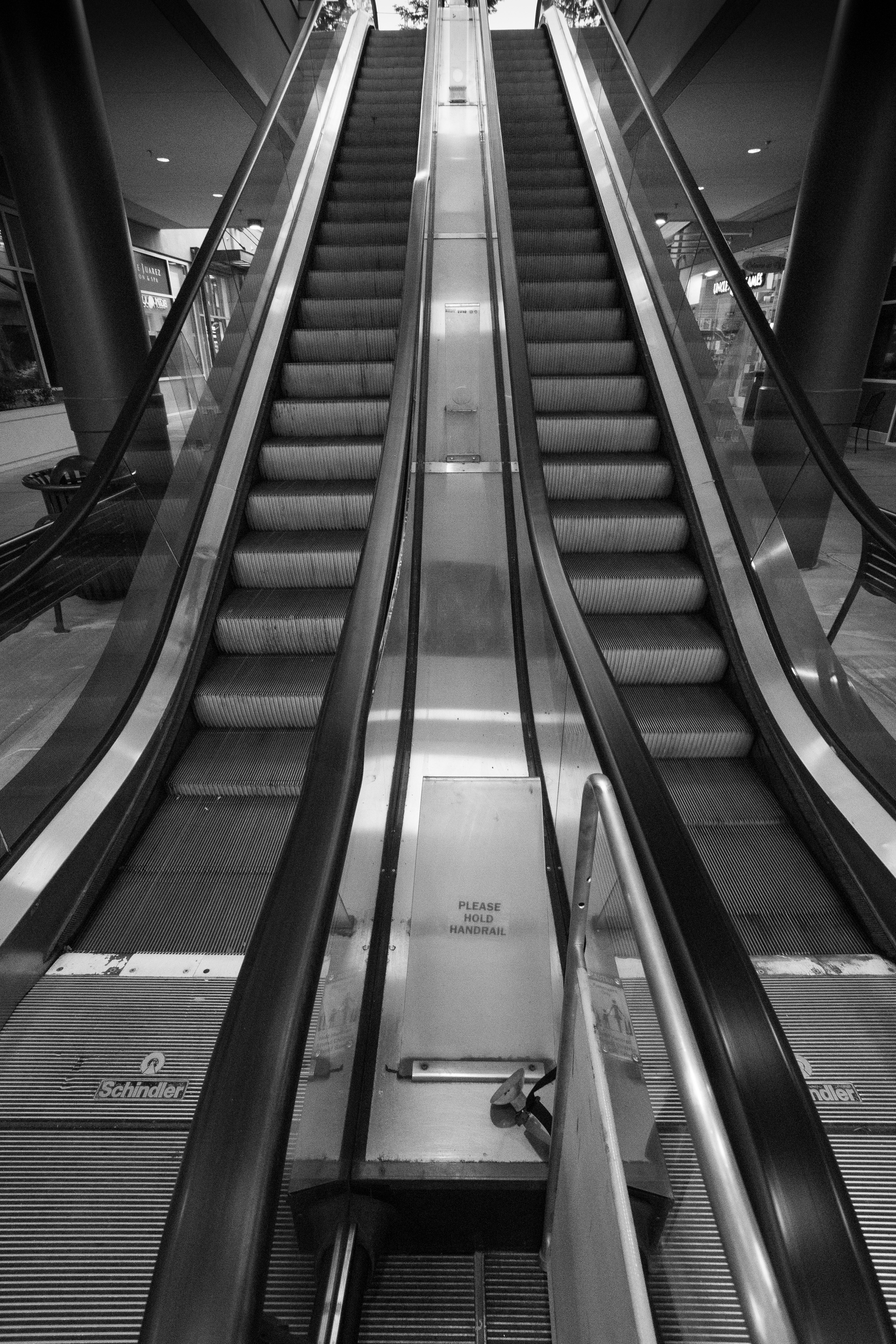 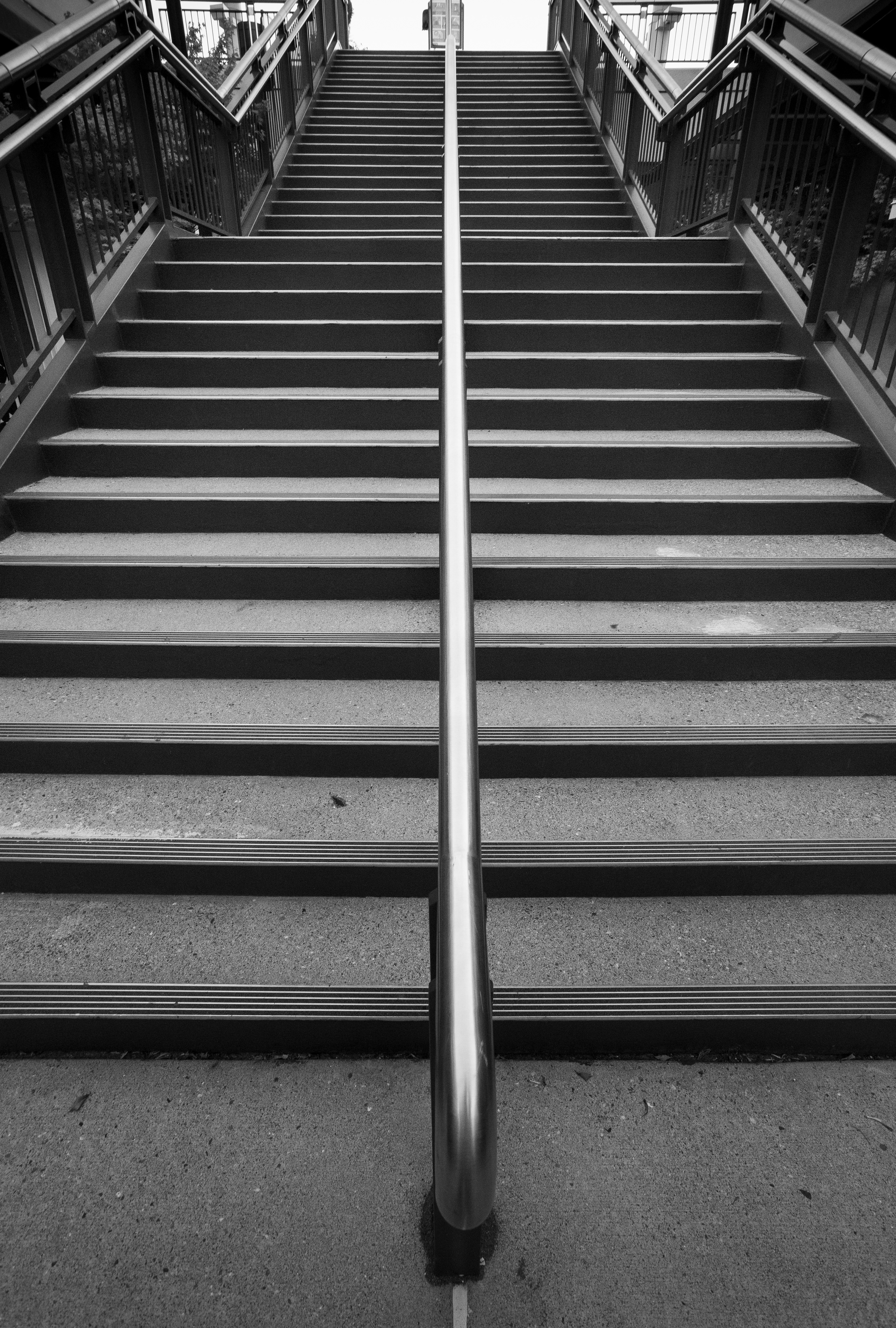 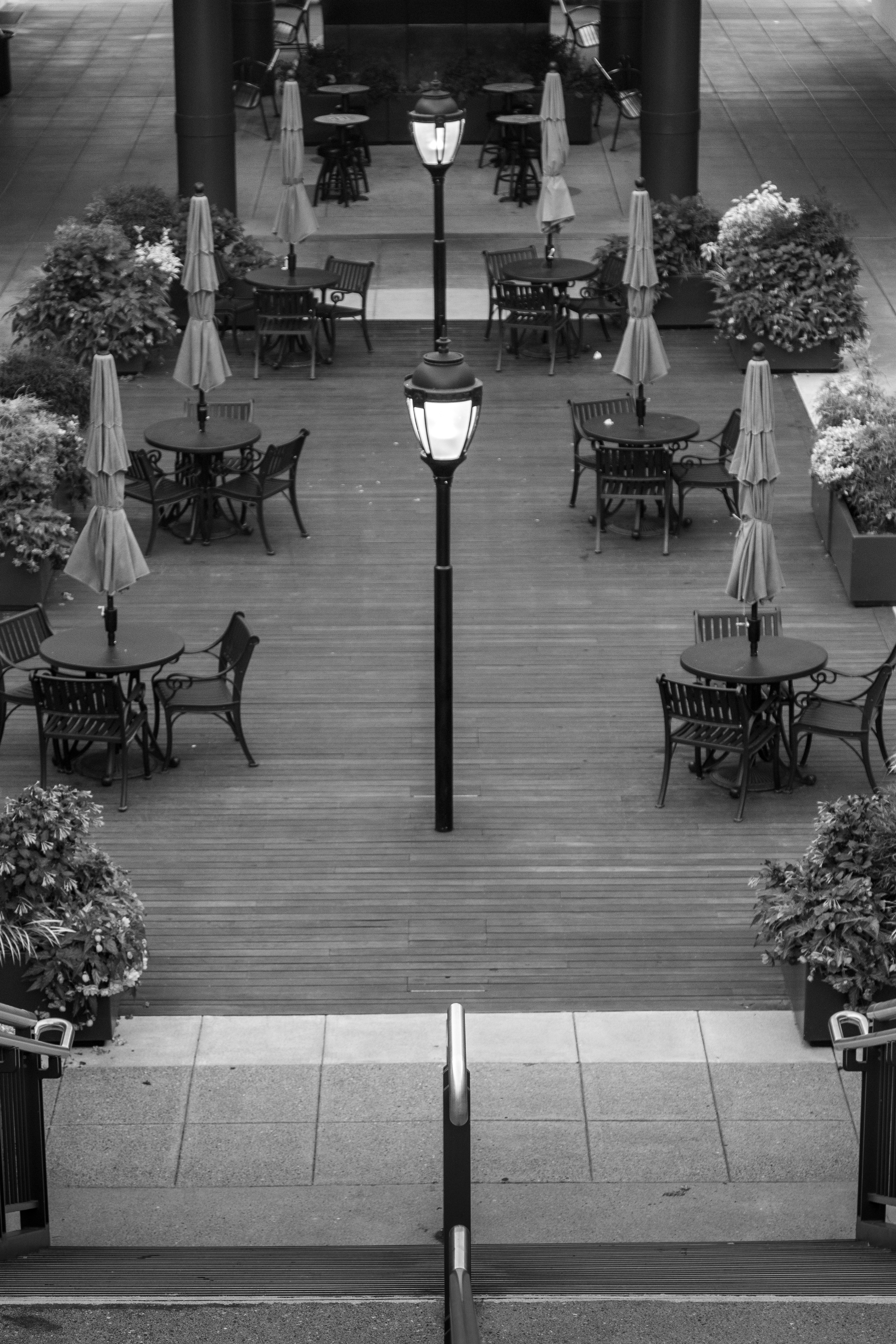 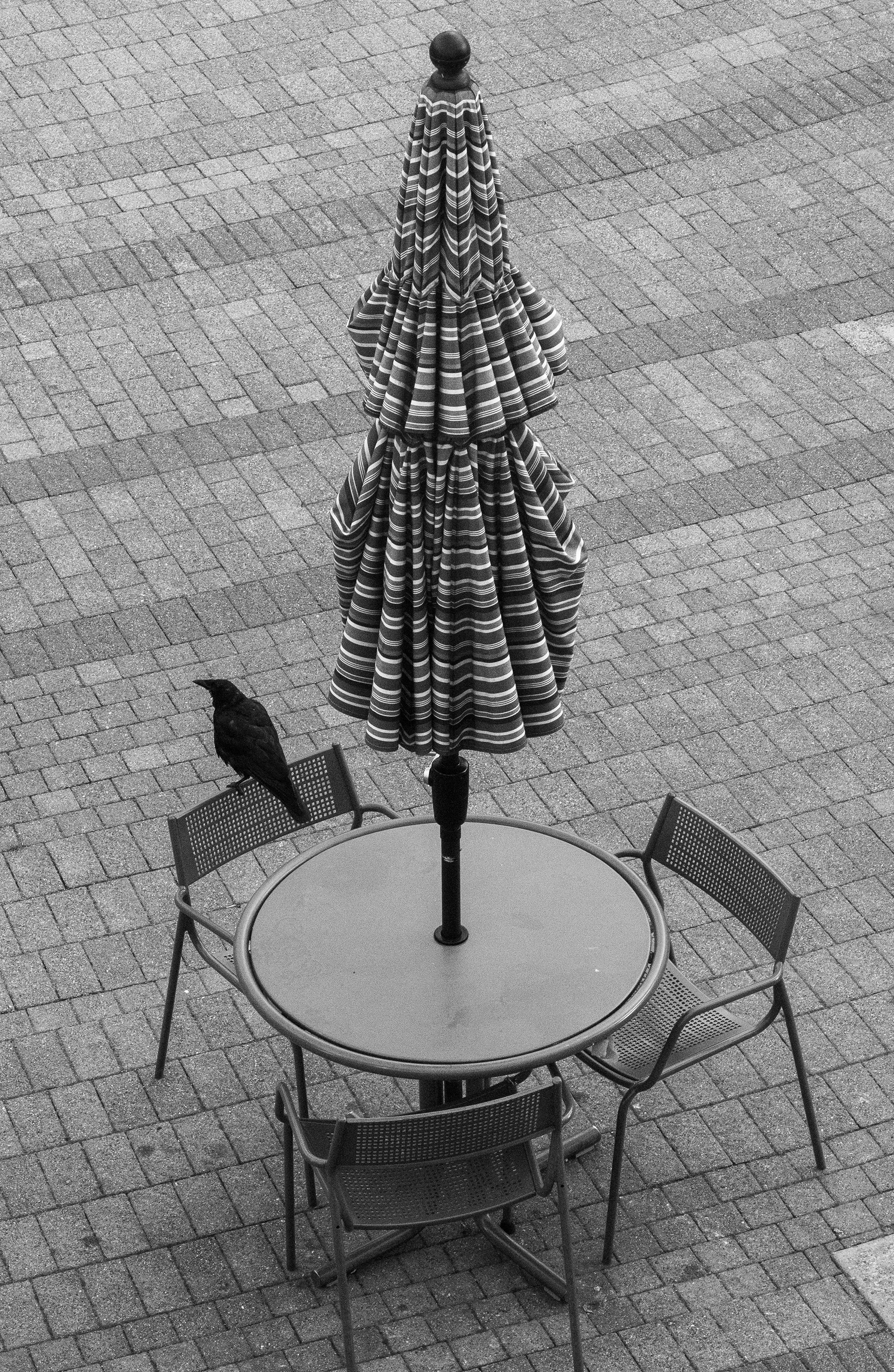 I went downtown yesterday and saw a shot I've been meaning to take forever. But, as usual, the place was packed with traffic and pedestrians. Figured I'd try sunrise Sunday. Should have the place pretty much to myself.

This is the shot I went to get. Madison drops straight down from Capitol Hill right into Elliot bay. But I couldn't pull it off. Tried a bunch of angles and perspectives. Bay was bright. I thought I could use that to my advantage, but never got anything I liked.

But that bay light was very much useful for other purposes.

4th and Madison is the address of the Seattle Public Library building. It opened in 2004 with a Rem Koolhaas design. Pretty spectacular, inside and out. All angles and glass.

The building's shaded blue-hour blue combined with the golden-hour bronze of other buildings on the block worked out nicely with the light available this morning.

Took a back road along the coast up towards Bellingham.

Perfectly level horizons thanks to a nifty viewfinder feature.

A couple of monochromes. Is there any other word in the English language with consecutive "U"s?

Weather's been glorious here in the Cascade foothills lately. Next town down the valley has a railroad museum in an old station. It's kind of the civic hub of this town. Whenever they have festivals or events, they happen right there. I mostly try to avoid those.
I probably drive through this town twice a week. I've been to that train station maybe twice since I've lived here. But I was driving through this morning and saw this light. And of course, nobody around. Had my run of the place.

I kind of avoided the people, although there were people out. There's a slip where you can buy salmon off the boat and there were 8 or 10 people in line. For the crews, this is the off season.
Slips are full and a little deckhand work is going on, but it's mostly quiet. Like a lot of places around here.
Lots of colors in a harbor. Light was odd. Relatively clear to the west, over the water. But this was in the morning and the sun was in the east behind an overcast.
I guess maybe you'd call it filtered sunlight. I wasn't really sure how to use it. I'm surprised these came out as well as they did. 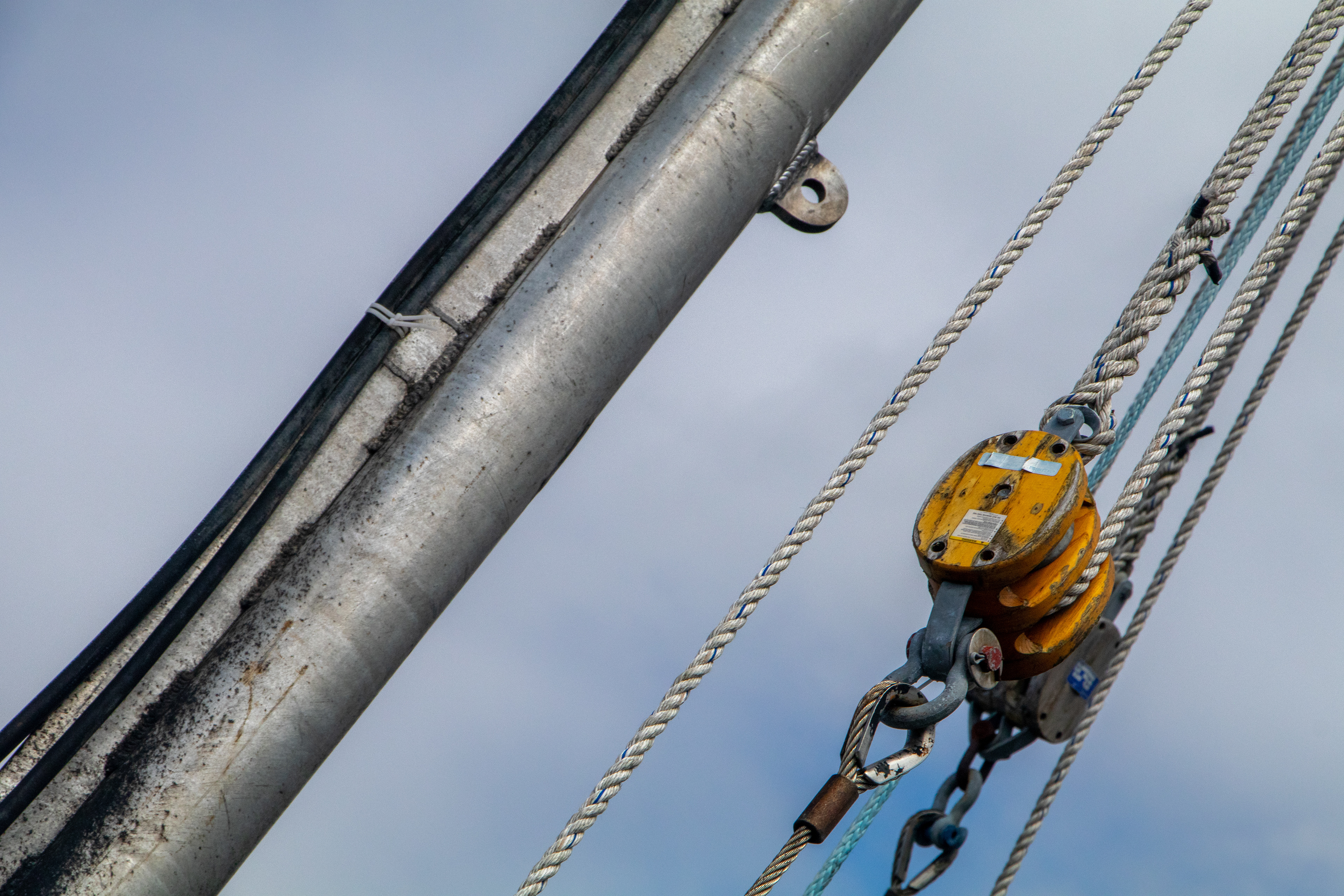 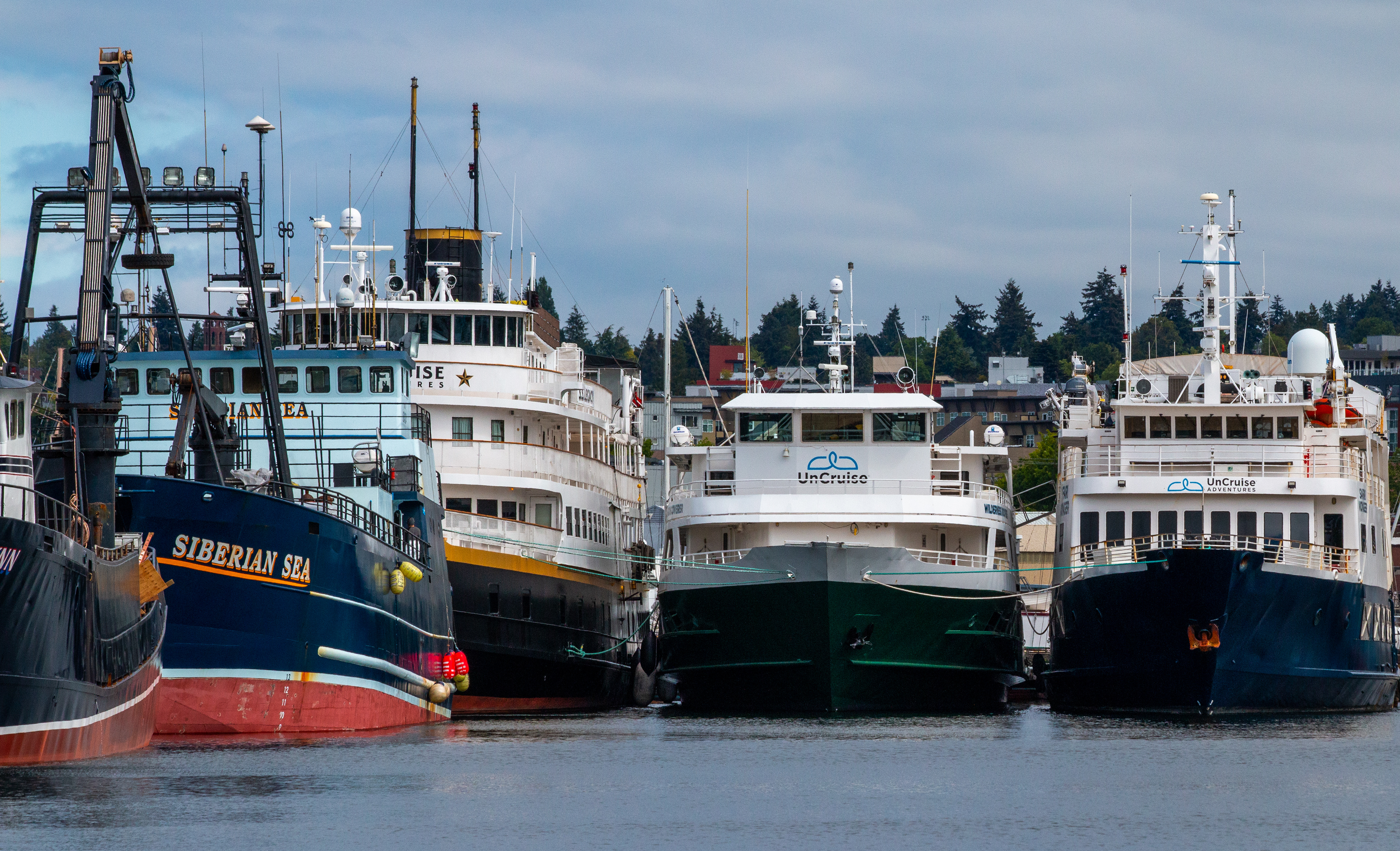 I understand the Quandary.
Vail CO is in the Rocky Mountains, some 1200 miles from the nearest ocean.
I imagine there were several quandaries involved in getting this vessel christened.

Today, this is what a work day looks like. Go a few blocks up into the residential part of the neighborhood. This is where the work's being done.

This is a triangular-shaped building. Sun coming through the trees on the right lit up that side of the building. Reflections off windows across the street lit the left side. Allowed for some symmetry.
At the marina, shot a mass of masts while masked. 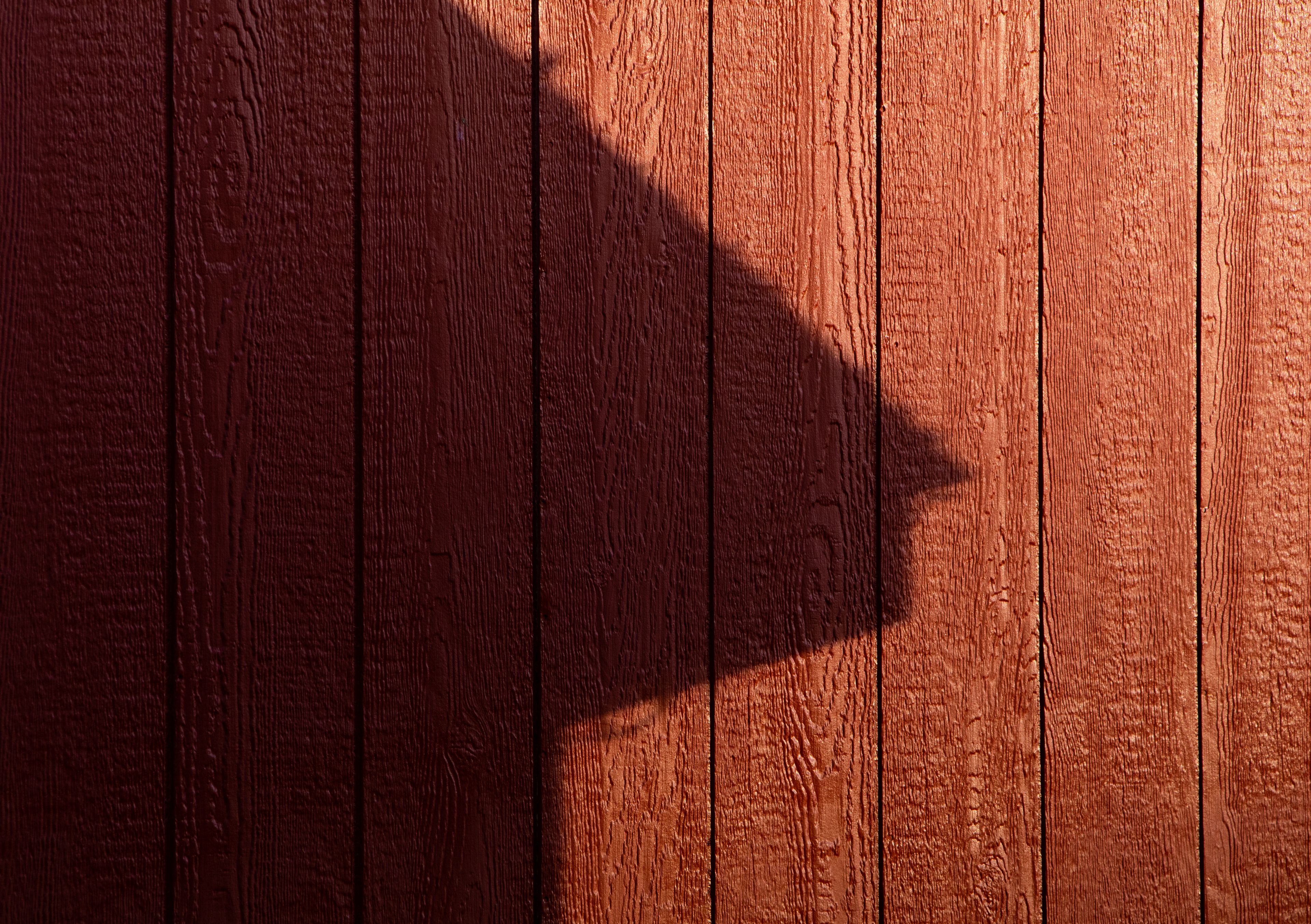 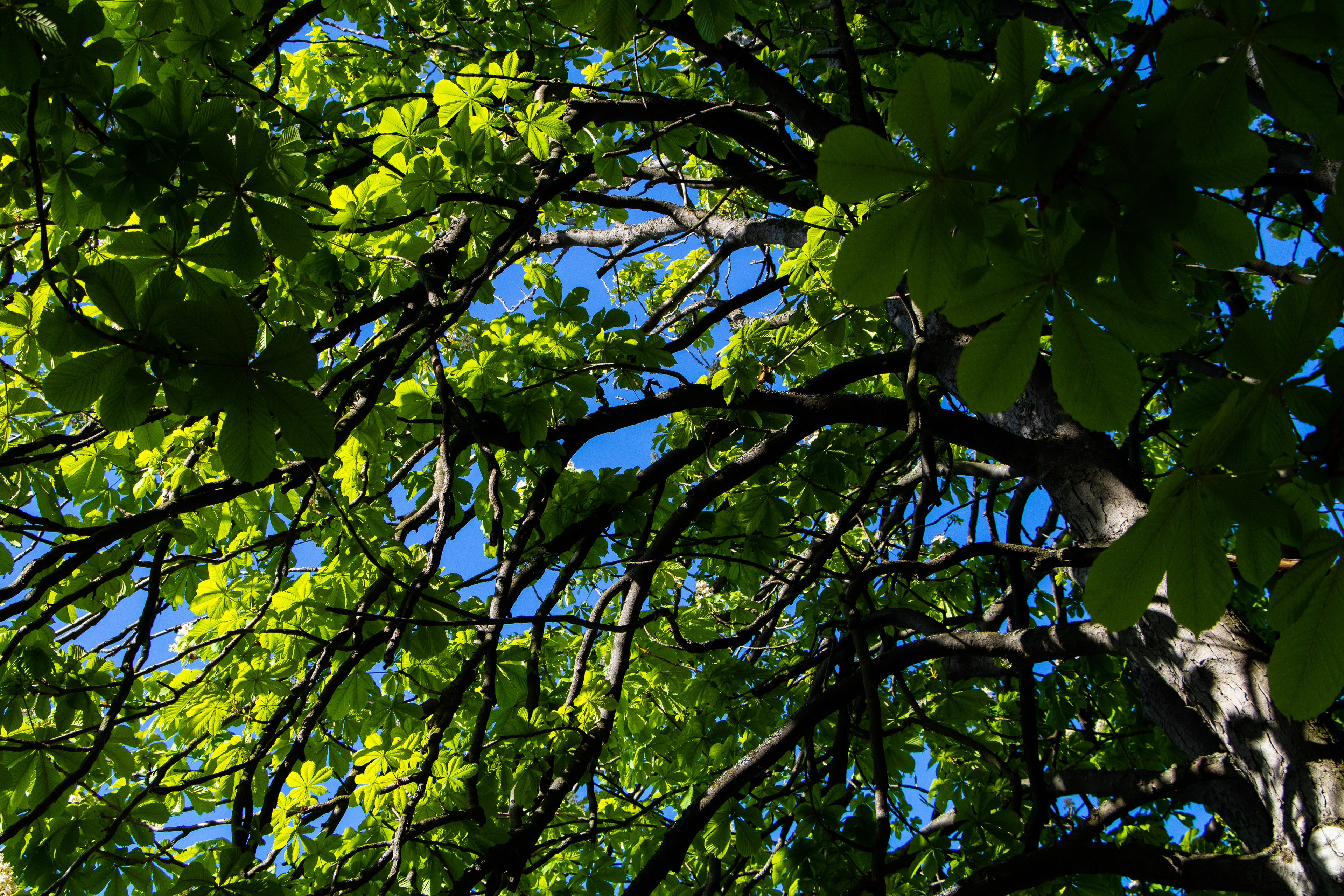 There were people out. But for one exception, they were all inessentials, like me. We dutifully kept social distance. Everybody cordial, but paying attention.

The only essential worker out was the woman the city sent to maintain urban landscaping. Specifically this morning, the flower boxes. I don't know, I found that reassuring. A little piece of civic humanity. We aren't savages. The flowers should look nice.
I should have taken that woman's picture. I'm kicking myself. I should have gone over and talked to her and had her let me take her picture. Didn't even occur to me until I got home. Lesson learned.
The least I can do is show some of her work.

I saw this pile of bricks that were lit pretty cool. But they were behind a fence. Decided to put the fence in play. I think it helped. Without the fence it's just a pile of bricks. The picture is still just a pile of bricks, but the fence distracts you some from thinking about that. Or something. I kinda like it.
This is the happiest looking mortuary I've ever seen. Not that I notice mortuaries much, but this one definitely caught my eye. This place looks like it'll send you out dancing to the next world.
I probably spent 30 minutes trying to find that picture. The dancing picture. Walked up and down the block. Both sides of the street. People looking at me funny. And this is the best I came up with. It's not nearly as fuchsia, or whatever that color is, as it looks when you're driving by.
Picture doesn't say dancing. I blame the weather. You can always blame the weather.

This was at sunrise. Coffee shop lady was setting up tables outside her shop next door. Just her and me on the street in the cold dawn. Otherwise, quiet.
This is a poplar plantation. Pulp timber. They make paper out of it. You hear people say, use less paper, save a tree. It's one of these you're saving, and honestly, they grow back. They're a crop.

I'm driving through a small city thinking, OK, the light's going to pop here in about 15 minutes. What can I shoot?
I'm in the strip-mall part of town. Don't even bother.
Driving a little bit gets me into auto row. What the heck. In light like this, subject is just a supporting role.
I did find this little nugget off a trail. I stole the idea from a picture I saw on a web site. Not a terribly good example of the subject, but I like it and I'll keep looking. No apologies for the pilfering.

On the way back around I stopped at this place that has rough-milled hardwood slabs on display in the parking lot. Always.
If you're looking to build a custom conference table, there's some pretty fine lumber at the Hobart Market.
Cherry blossom time is starting up around here. Cherry trees everywhere.

Any community of any size has cherry trees and they all look great when they're in bloom. They take to this climate like natives - I have a couple of giant ones in my yard - but you never see them in nature. You'd think you'd see the occasional wild cherry that escaped from captivity, but no. They only grow around people. I wonder why that is.
I like this shot but I'm not sure why. Maybe it's the cold, pre-dawn daylight.

Spectacular day in the North Cascades.

Snow melt at my elevation.

But a little bit left below the timberline.

Shed behind the mill.

From Moses Lake I drove about 100 miles of backroads to the Grand Coulee Dam. Extra desolate that day.

This print kind of captures the spirit of those backroads.

The city's architecture is dominated by a huge-assed steel bridge to Washington state on the north bank. It's tall enough to let container ships pass underneath.
The Astoria skyline

Peak golden hour.
See that heart carved in the tree in the upper right? If I had noticed that when I took this picture, a picture of that heart would have been this picture.

As the daylight ebbs, the nightlight creeps in.